1. How can this help me with cable fault location?

TDR is used for pre-location in cable-fault location systems. The term pre-location is used because the exact routing of the cable is not normally recorded and therefore the distance that any TDR pulses travel may not relate exactly to the linear distance from the connection point. Typically with fault location a thumper (surge generator) is then used to pinpoint the fault in the vicinity of the pre-located point. This saves a lot of time and thumping stress on the cable.

Understanding the effect of any dis-continuities in the cable on the propagation of pulses can enable the operator to locate faults along the cable.

The fault that is trying to be located needs to present a significant impedance change which is the case with short circuits or with open circuits. For these kinds of faults the TDR can be used on its own to identify the location of the fault which should cause a significant reflection at the fault location.

Higher impedance faults or voltage-dependent faults may not be detectable with TDR. In this case the TDR unit is combined with a voltage source to induce an arc. An arc-reflection filter couples the TDR system to the cable and a number of techniques are used to perform the TDR pre-location.

There are two ways in which the arc can be used to locate faults. 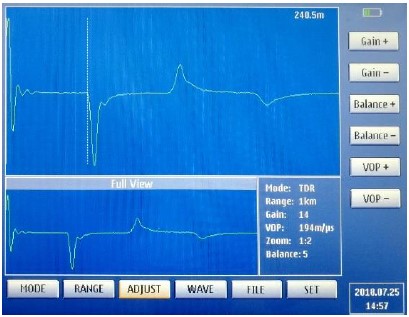 2. How is TDR used in PD testing of cables?

TDR techniques are used during the calibration/setup and testing phases of PD.

During calibration a pulse is injected by a calibrator and the transmission of this pulse along the cable is recorded. Reflections will occur at any impedance dis-continuities such as faults, joints or the ends of the cable. It is very useful to be able to record the propagation of a controlled pulse prior to the attempted detection of PD pulses. It is important to be able to see the reflection of the calibration pulse as this information is needed for the eventual location. Knowing the positions of the joints is also useful for final location.

During PD testing any PD pulses will travel down the cable in either direction. The pulse and its reflections can be recorded and the differences in times of arrival at one or both ends can be used to determine the location of the PD using TDR principles.

Advanced “tri-lateration” techniques are used for 3-dimensional location although this is not strictly speaking TDR.

3. Can I use TDR as a diagnostic assessment tool?

There is ongoing research into the use of TDR signatures to assist with the location of damage in cables. Damage may be present in a cable without the cable faulting (ie it can hold the test and operational voltages) but it may be a candidate for later failure.

A TDR echogram/reflectogram is obtained from the healthy cable or from an adjacent healthy phase and compared to the echogram signature of the suspect phase.

The comparisons can be made

LV distribution systems present more of a problem to the utility. The following problems need to be overcome.